Remember the sketch I made for this costume? I’m happy to report, I came fairly close.

For the top, I started with a base running shirt from 2XU, which I bought solely because the color was perfect. I decided to get the long-sleeved version, just so I’d have some extra material to work with, in case I needed it. I wasn’t terribly fond of the shirt, other than the color, as it was a little tight for my liking, but it performed well on race day, which is all that really matters.

I put the shirt on inside out and marked where I wanted to start the puff sleeves. After removing the shirt, I carefully cut the sleeves off. Then I measured how long I wanted it to be, added a couple inches, and chopped off the sleeve at that point. After that, I ripped out the seam and cut it into four roughly equal pieces.

I later discovered that this didn’t make the sleeve poofy enough for my liking, so I did end up using the lower part of the sleeve to cut out two more sections. Glad I bought the long-sleeved shirt!

I was feeling broke and lazy, so I rummaged through my scrap box for some pink or purple fabric to use as the sleeve insets. I had about three choices, so I picked the one I liked the looks of with the skirt the best (as for the other choices, one was more hot pink and the other was too blue). I know it’s not the same color as the source photo, but, as I said, I was trying to avoid a trip to the fabric store.

I cut out pieces to match the lengths of the already-cut sleeve pieces, then arranged them out how they would be sewn together. 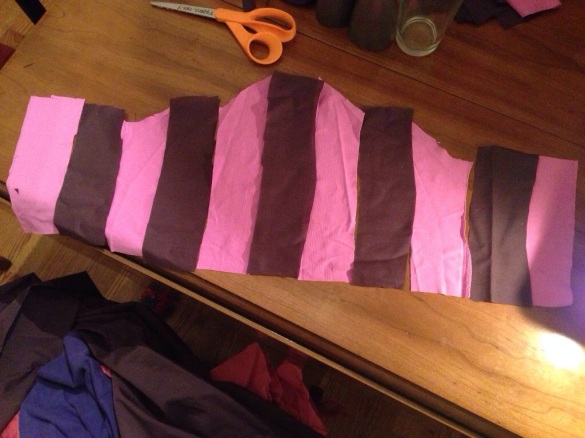 The cut-out material for one sleeve.

I pinned each piece, right-sides facing, and then sewed them all together. 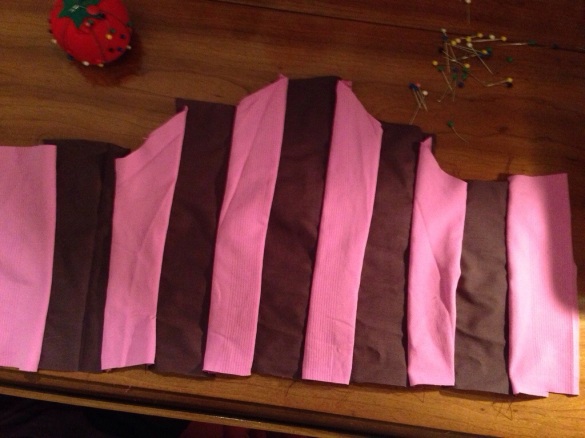 Finally, I attached the sleeve to the shirt. (It sounds so simple to say this, but you don’t know how many times I accidentally sewed something wrong and had to redo it. I hate sewing, by the way.) 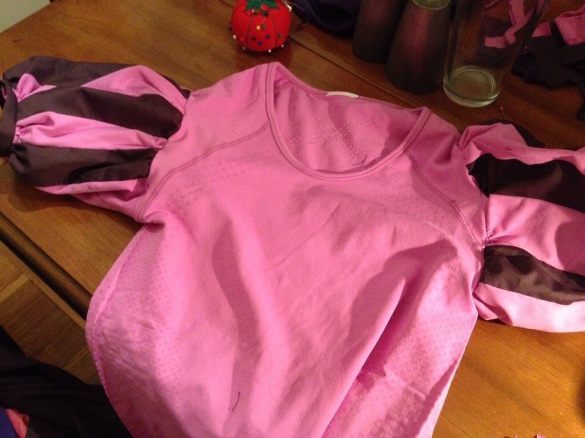 Sleeves attached to the shirt.

Once both sleeves were on there, I had to figure out what to do about the corseted look of the front. I ended up going to the fabric store anyway. (So I might as well have used the right color fabric on the sleeves. Oh well.) I rummaged through the trim and ribbon aisle until I found some lace stuff that looked like it could double as eyelets. Score! Way easier than actually sewing eyelets.

I used the lace trim around the neck of the shirt (since her dress has lace around the collar), and then laboriously hand-stitched the trim down the front of the shirt in two lines. When that was done, I laced the pink ribbon through it. Voila! 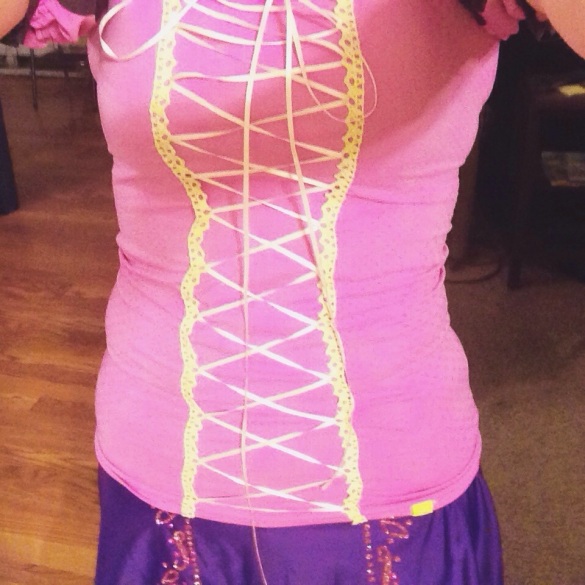 I trimmed that ribbon down before the race.

The skirt was easy. I bought it from SparkleSkirts.

I looked all over Disney World for either a Pascal or frying pan pin I could wear, but came up empty handed.

I also considered wearing a tiara, but I forgot to buy it. Probably would have been annoying anyway. I did style my hair to look like it had just gotten chopped off (like I literally got a hair cut the day before I left for Disney…at Great Clips, so it would look…rougher), but the humidity took that away from me. 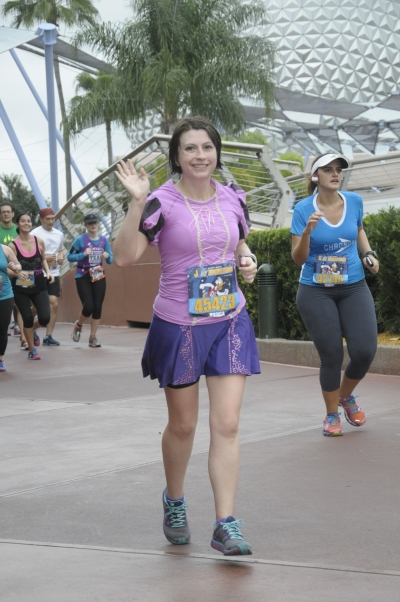 Full shot of my costume

Anyway, the costume was great! I had no issues with it on race day and would wear it again. 🙂

3 thoughts on “My Rapunzel Running Costume”