I’ve done two Color Runs before (spring 2013 and fall 2013), but I signed up for this on a whim because it was so cheap when they first started advertising it.

I’d never done a nighttime run before (since the Electric Run cancelled last year), but with it being a fun run and not for time, I didn’t really watch what I ate all day or anything like that. Actually, we went canoeing earlier in the day and alcohol was consumed, and then we went to a birthday party where I ate a lot of cake.

The run was located at the Nashville fairgrounds and was on a mix of pavement and grass. Probably more grass than pavement. They were playing pretty decent music, although you couldn’t hear it for most of the run.

I wasn’t feeling all that wonderful to be running (see alcohol and cake, above) so we walked every so often but ran most of it and at a pretty decent pace. It wasn’t terribly congested, like the previous two Color Runs I’ve done. That said, I didn’t actually track the run, so I’m only guessing that it was a decent pace based on what I was feeling and I wasn’t feeling great, so who knows.

Jonathan did make me run at his pace for like 30 seconds and I about died.

I don’t remember how many color stations there were, but I don’t feel like we got as much color on us while going through them than in the daytime runs. But I liked the blacklights and the bubbles.

At the end, we got a medal and a pouch of color which we dumped all over each other. We hung out for about, oh, two minutes before I decided I wanted to take a shower and lie down.

All in all, it was a pretty fun run. I’d do it again with a large group.

The Color Run is even more fun the second time around!

Since I had done the Color Run last spring, I knew what I was getting into and what I wanted to accomplish. I knew that I liked blue, pink, and purple (which all stay pretty vibrant), and I wanted to stay away from green, yellow, and orange (all of which I think have a tendency to make the colors look brown). I also had purchased a waterproof iPhone case, so I could bring my phone through for photos without worrying about it.

My outfit choice was a colorful skirt from RunningSkirts paired with the same Color Run tee as last time. You can see how well the color washes out of it, since it had sat in my bathroom for over six months without being washed and then I washed it the day before the run for the first time. I also put some blue hair extension clips in my hair, from a faerie costume I made years back.

Here’s our team’s before shot! 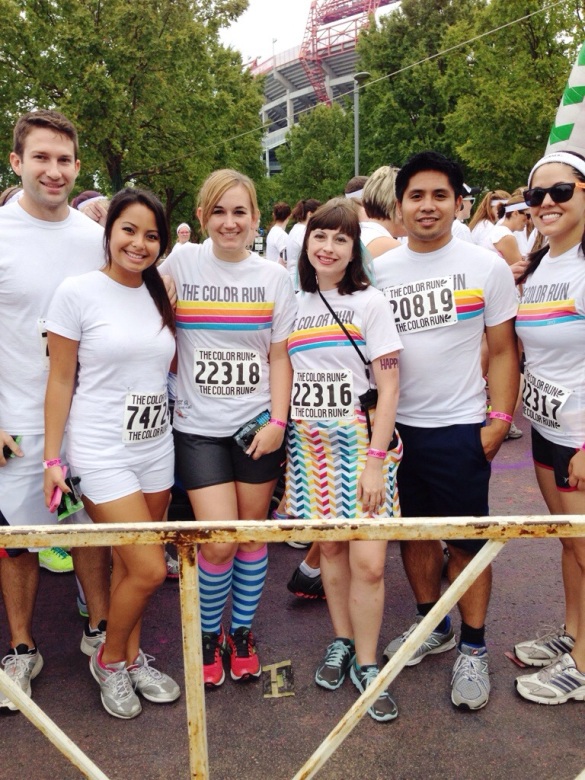 We had signed up for the early 9am spot, but a few team members were running late, so we didn’t get on the course till 9:20 or so. It was the same course as last time, with the colors in roughly the same areas. The only real difference was that instead of orange being cornstarch, it was liquid, which didn’t matter much to me, since orange was one of the colors I was avoiding.

We jogged along (or I jogged along while some of the team walked), but it started to get really awesome when we hit pink! I even laid down to cover my back in pink (which mixed with the orange liquid that got sprayed on my back, formed a dark red…boo!).

Then we made it to the blue, and I faceplanted (on purpose) to cover my front in blue. By the time we reached the finish line (a leisurely 45 minutes after we started), I was pretty well colored, but it wasn’t over. We still had our color packs, and Daniel had purple! I instructed him to dump some on my head.

One disappointing thing about the fall’s run is what seemed to be a lack of professional photographers. There weren’t any even stationed at the backdrop like last time, so we had to get other people to take our photos. Luckily, they were people my friend Jessica knew, so I didn’t feel too bad about making them take 10 different jump shots.

I think this was take three.

I did manage to not inhale/ingest as much color this time, so after I took a bath (which turned out awesomely half-blue, half-purple), I didn’t have much issue with color turning up weird places over the next few days. Still love the Color Run!

With only a week left of my doctor mandated running break, I’ve been thinking ahead to how I want to spend the next few months. The first few weeks will just be me getting back into the habit: some one, two, and three mile runs a few times a week. Then I still have six weeks of Couch to 10k left, so I will attempt to finish them out before starting official half marathon training on September 23. This should put me in a good place for my 5ks this fall.

Right now I have two 5ks and two fun runs planned. The first of the 5ks is the Fremont Oktoberfest 5k while I’m in Seattle in September. I figured it would be nice to do a race there, and we were going to Oktoberfest anyway, so it made sense. (I’m also excited to get in a few runs around Green Lake while I’m there!) Then I’ve got two fun runs: The Zombie Run and The Color Run. The week after the Color Run is my second fall race, the Go Commando Clarksville 5k, where I hope I will get a nice PR.

Then November and December will mainly be spent upping my mileage in prep for the 13.1 I have to cover in January! I’m definitely not planning on truly racing my first half. Since it’s at Disney, I plan to enjoy myself and stop and take photos with characters. No matter what I PR, right? Then after Disney, I get to start prepping for the Country Music Half, where I do hope to PR.

I’m so excited to get back into it!

If you get a chance to run The Color Run at any time, I highly suggest it. It was a ton of fun and, since it wasn’t timed, a nice, easy run where you could take your time to get doused in color.

It was a pretty chilly morning in Nashville, with the sky cloudy and in the mid-40s. Our team (which consisted of several of my coworkers/friends) arrived at LP Field and was completely overwhelmed by the sheer number of people waiting to start. We ended up pretty far in the back, since we arrived about 15 minutes before the scheduled starting time of 9am.

They release runners in waves every few minutes. It took approximately 45 minutes before we got to actually start the run. A few people (and when I say a few, I mean a lot) decided to “cheat” by climbing up the bridge stairs instead of just waiting, but we stuck it out and were glad we did. At the starting line was loud pumping music, people throwing out free stuff, and the people who just couldn’t wait to be covered in color and started dousing everyone around them in it. So even though the wait was long, it was worth it.

The start was slow, as you can see in the Nike+ map below. There were SO many people that it was nearly impossible to run at a decent pace. Once we were over the initial bridge, there was more room. Our team’s plan was to walk through all the color zones, which is where you see the red spots on the map in the beginning.

Around a mile and a half (which I swear is where it always happens), I started to get a horrible side stitch. So much of the red that you see towards the end is either me walking through a color station or me walking because it hurt too much to run. I did manage to ignore the pain long enough to make a strong finish (well, strong for me; I’m slow).

My before and after shots!

When we arrived at the finish line, we all opened up the bags of color that we received at registration and dumped them on our team. Then we took a group photo and danced a bit to the live DJ while people all around us threw color.

Overall, it was a great time, and I can’t wait to do it again in the fall!