It doesn’t make any real sense to continue it. I’ve already met my goal time. Then I ran an even better race the week after. All of that without tapering. And I had to go majorly off my plan anyway, due to a stomach bug, ice/snow, and then getting my wisdom teeth out.

It seems like the ideal time to start a new plan, with a new goal.

The Tom King Classic is no longer my goal race. It will now just be a fun long run that I will run by feel. I still plan on keeping Oak Barrel easy.

My new goal race is the Kentucky Derby miniMarathon at the end of April. I’m going to aim for a sub-2:10 time. That means running about 15 seconds per mile faster than at Cedars Frostbite, which doesn’t seem too terrible.

What you can’t see in this photo are my chipmunk cheeks that I’m hiding behind Polar because I had my wisdom teeth taken out.

Needless to say, I have not done any running and probably won’t be doing much until I’m off the painkillers.

I had initially planned for this run to be a goal pace run to prep me for Tom King three weeks later. This meant a finishing time of 1:36:00. In the weeks leading up to the race, I felt pretty good about this. I had run 1:37:37 in training, which wasn’t too far off.

And then the Cedars Frostbite Half happened, and I had no idea what to do with my goals for the rest of the year.

Since I had run so hard just a week earlier, should I even attempt a goal pace run? I finally decided I would just run it and not be concerned. I threw all goal times out, except that I did want a PR because I figured that would be fairly easy to do.

I got up bright and early at 5am. My cousin Gillian was running the 5k and we were carpooling downtown, so she met me a little before 6am to head down there. Unlike last year, Amanda actually remembered to sign up for the race this year! We met up with her in the parking garage and all walked over to the park together.

Freezing before the start.

We were all assigned to different corrals but decided to start together, so we chose to begin from my corral, E. It took about 15-16 minutes to reach the start but soon we were off.

Mile 1: 10:00
Mile 2: 10:04
Mile 3: 8:49
For the first two miles, I ran with Gillian. She was aiming for a sub-30 5k, so we were going about the same pace. It was a little congested at the start, so there was a bit of weaving around people. The second mile also brought the massive Rosa Parks hill that we ran up last year as well. So these miles were a little slower than she was planning.

The 15k runners and 5k runners split off during mile 3. I wished Gillian good luck and made my way down Church Street.

I think my watch had a few snafus during mile 2 and decided to even them out in mile 3; I’m not convinced I was actually running a sub-9 minute pace, but I about panicked when my watch beeped and showed that pace. Way too fast!

Soon after, we entered Centennial Park for a couple miles. I enjoyed the out-and-back sections through the park as they allowed me to look at the oncoming runners and see if I could spot anyone I knew. I never did, but it was distracting nonetheless.

Mile 7: 9:29
Mile 8: 10:01
Mile 9: 9:39
Once we left the park, there were less than three miles left. I was pretty exhausted by this point and ready to be done, but I pressed on. I had forgotten to eat something that morning and my stomach was growling. I tried to take a chocolate marshmallow at the last water station, but ended up dropping it. On the last mile, I took one non-water station walk break. I just needed a little more energy to finish strong.

You can watch me cross the finish line around 14 seconds in here:

I was extremely happy with my time for this race, especially considering I had just PR’d the half last weekend. I took 15 minutes off my time from last year!

I met up with Gillian after crossing the finish line. She had gotten her sub-30 goal and finished in 29:45!

After downing my hot chocolate and fondue, we began our trek back to the car with frozen fingers.

This race continues to be one of my favorites despite the weather always being dreadfully cold. It is so well-organized for a race its size. Smaller races could learn a lot.

The swag was great this year, just like last. We got zip-up hoodies, which are super warm and comfy. The race name is stitched onto the front. The bonus this year was that all 15k finishers got a medal! I also managed to get a “will run for chocolate” running hat in my bag. 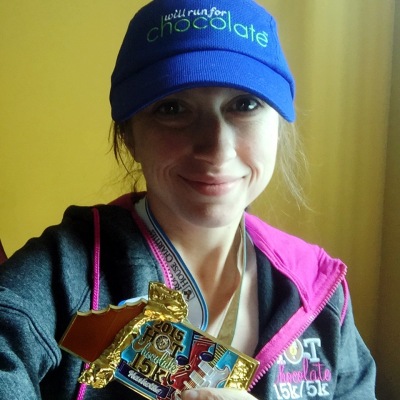 I should have thrown some makeup on before taking this. Sorry.

And the post-race food is amazing! It was the same as last year’s, but that is in no way a complaint. I didn’t keep my mug this year, since I already have one that is collecting dust.

This was my third race in a row of running by feel instead of by watch. I continue to amaze myself at what I can do when I’m not entirely trying. I even bested my 10k time from last November, and you remember how amazed I was at that time! Overall, this was my best race to date, time-wise. I wish I could have finished a little stronger, but without really tapering or anything, I am still pleased with my performance.

Here’s what McMillan thinks I can do now:

This week didn’t start with much running because of the aforementioned stomach bug I had gotten on Saturday. Since I hadn’t really eaten in a few days (and what I did eat didn’t really stay down), I was pretty weak for a few days after I finally recovered and I abstained from running for that reason.

I finally got out on Thursday evening, when it was, of course, freezing. I just did a few miles of easy intervals with the group to get back at it before the race on Saturday.

The race went well. I’ll be posting a recap soon. But I did take Sunday off too to recover from it.

This week got a little wonky. I originally rearranged it so that I could run outside with the Flyers twice this week. But then I found out (on Wednesday) that we had Preds tickets for Thursday (wasn’t on our half season plan, thus why I didn’t know). And I don’t like running on Fridays.

The leg heaviness from last week continued this week. My speed work on the treadmill on Wednesday was absolute torture. I didn’t think I could make it through. But I did.

You would think, since I had two days of rest before the half, that my legs wouldn’t be as heavy. But they still were. And I still managed to beat my time goal for the year anyway. I don’t know what to do with myself now.

Unfortunately, around 5pm or so on Saturday night, I started feeling bad. I don’t know if it was a stomach bug or what, but I basically spent Saturday night, Sunday, and Monday in the bathroom. Thus, no running on Sunday.