I didn’t really have any goals for this race, since it was training for the Kentucky Derby Half. I knew I wanted to walk some of it, so recovery would be easier on me. I promised myself I wouldn’t get a PR. I was hoping for around 2:30 for my finishing time.

I got up bright (err, dark) and early at 4am to get ready. I had been back and forth on what to wear (the weather was supposed to be 45-50 and sunny) but finally decided on tights and a long sleeved thin shirt.

I was carpooling with one of the Mt. Juliet Flyers, so I met him at 5am and we were on our way to Lynchburg. The best thing about being up that early was being able to watch the lunar eclipse until the moon finally set around 6am and we couldn’t see it anymore.

We arrived in Lynchburg close to 6:30 and got our packets. Then we stayed in Rob’s truck for the next hour because it was cold. We finally got out and met up with the other Flyers for some photos.

Do I look cold? I was cold.

After a port-a-potty stop, I joined back up with some Flyers at the start line. We just stayed towards the back since it was going to be congested no matter what, and I didn’t want to start too fast.

Mile 1: 10:16
It was pretty congested at the start, so there was a lot of weaving going on. My plan was to try to run with one of the Flyers who was doing 4:1 intervals, but she took off, and I lost everyone else as well, so I ended up on my own. I hadn’t set up my watch for intervals, so I decided to just start out walking a minute each mile.

Mile 2: 10:36
I was feeling pretty good on the first few miles. I knew Whiskey Hill comes on mile 5, so I didn’t want to use up too much energy early on. I just tried to keep a steady pace. I think it was on this mile that we passed a very smelly cow pasture. Very smelly. 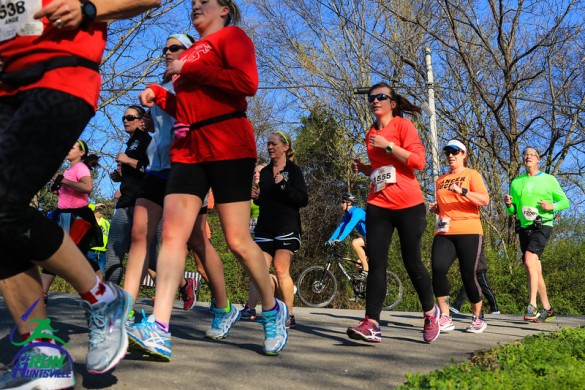 Mile 3: 11:00
I was having some issues with my running tights trying to slip down, so I took a bit of a longer walk break at the start of mile 3 to tighten up the drawstring.

The end of the third mile was marked with the first water station. There was a competition between the water stations (we had to vote after the race) and the first one was Mario-themed. I took a couple photos and continued on.

Mile 4: 10:26
I spent mile four mentally prepping myself for Whiskey Hill. I decided that once this mile was over, I would switch to doing 3:1 intervals for the next mile until I got to the top of the hill.

Mile 5: 12:41
I started out the 3:1 intervals pretty good, but by the time I got to the steep part of the hill, I just started walking. That was hard enough. My data says at one point this hill reaches a 28% grade. There was a photographer at the top of the hill, but he/she missed my victory pose and just took a photo of me looking like I’m dying. Don’t think I’ll be getting that one. 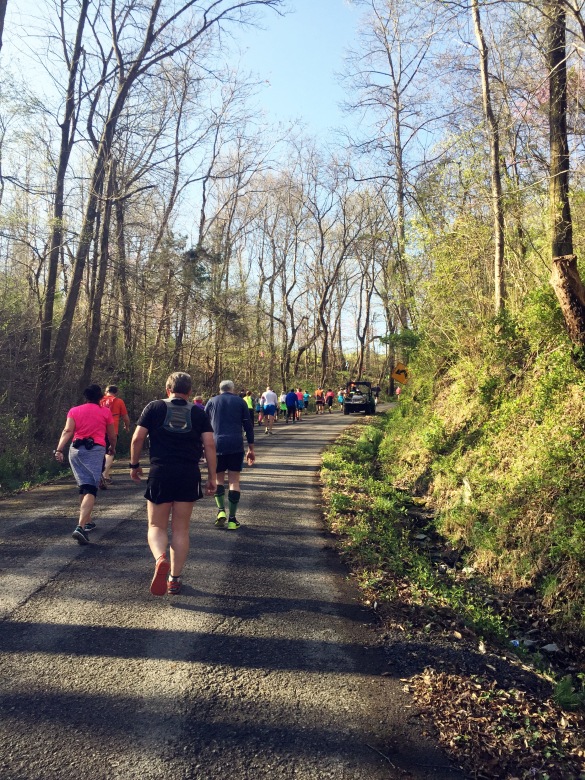 No photo could capture the actual steepness of this hill.

The next few miles were a bit of gentle rolling hills. I was just happy to be over Whiskey Hill. I did take a couple extra breaks on mile 7, when there was another steep (but much shorter) hill, and to try to get my stomach to calm down.

Mile 10: 10:29
The fifth water stop had food. I went for an orange slice, since I didn’t want to eat the second Gu I had borrowed.

Mile 11: 10:23
The last water station had a Wizard of Oz theme. I stopped briefly to take a picture for Amanda, who is a big Wizard of Oz fan.

Mile 12: 10:59
Mile 13: 10:27
I started walking quite a bit more on the last two miles because my legs felt shot. I had put on my finishing playlist, so I would just take a short walk break at the end of every song. I started picking up the pace a little with a half mile to go.

Final 0.1: 8:43 pace
I ran in as fast as I could at the end and managed to pose for my finish line photo (V for Victory!). This was probably the best I have felt at the end of a half so far, even though I was still hurting.

All in all, I enjoyed the race. I’m still not a huge fan of country races, as I really miss having a lot of spectators and I’m not very good at just enjoying the view, even though there were parts that were really pretty.

Post-race, there was a lot of food, which is nice. There was one whole table that was nothing but different kinds of cookies. I had at least one of everything (and many of some, haha). 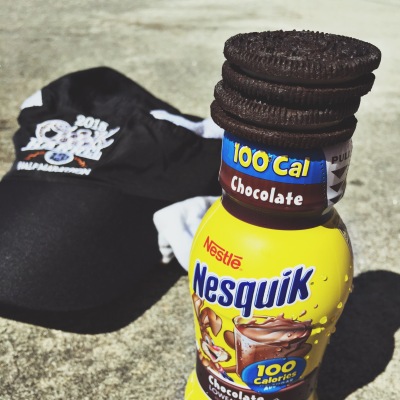 We also got some nice swag post-race. While we got our tech shirts at packet pickup, you had to actually finish to get your socks and hat. Definitely a nice perk. And the medals were pretty cool.

I’m glad I got to experience Whiskey Hill (which is no joke), but I think I may stick to more urban races for awhile. However, if you enjoy running through the country, I would definitely recommend this one!