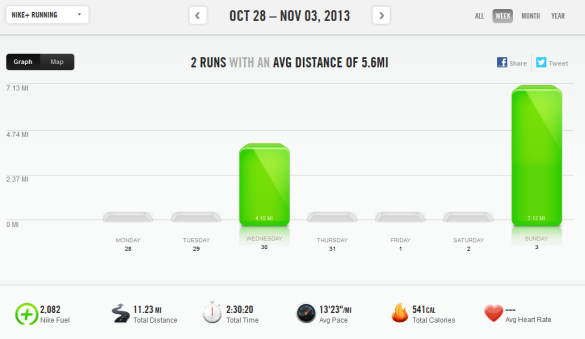 I finally dragged myself to the gym on Tuesday to hit the treadmill. I don’t know what they do to the treadmills at this place, but it almost feels like I’m running harder than I do outside and at slower speeds. They also keep the temperature in the gym up, so I was all kinds of sweaty after 4 miles. Like I haven’t been that sweaty after a run since like July. Anyway, I completed day 3 of week 9 of Couch to 10k.

I had good intentions about returning to the gym, but on Wednesday I had a hair appointment and Thursday was Halloween. I have no real excuse for Friday, but Saturday I shot a wedding. So, Sunday I went out for my long run of seven miles. I knew this would be the longest distance I had ever run at once. The weather was cool, the scenery was pretty. I put on my Nathan hydration pack for the first time and headed out to the greenway.

I don’t know what happened. I don’t know if I went out too fast or if the hydration pack was just a lot of added weight I wasn’t used to. Maybe it was the cooler, drier air. Certainly the fact that I had forgotten to take my Advair that morning played into it. But right around the end of the first mile, my asthma decided to show up.

I haven’t had issues with my asthma in months. Therefore, I had (stupidly) stopped carrying around my inhaler when I ran. But here it was in all its wheezy gloriousness. So I had to slow to a walk. I ran when I could, but those seven miles were very hard earned, with a lot of walking. While I completed the first mile in under 12 minutes, my subsequent splits were all closer to a 14 min/mile pace. By the end, my chest was hurting from trying to breathe. My back was hurting, probably from the same reason, with the added bonus of toting around 2 litres of water (I really didn’t need that much).

I will be prepared for my eight miles this weekend.