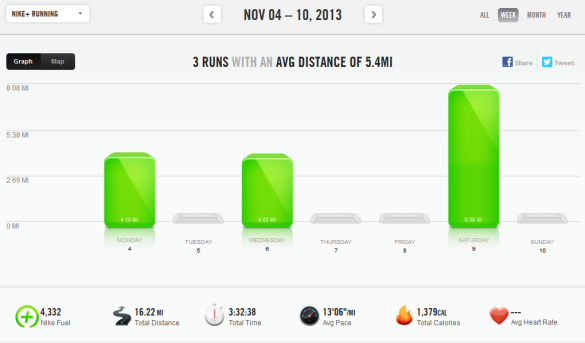 The week started out so well.

On Monday and Wednesday I hit the treadmill for 4 miles each day. The workouts went well, despite the feeling that I’m working harder on the treadmill than I should be at the (slow) speed I’m going.

On Saturday, I went out for what would be my longest run to date: 8 miles. I started out trying intervals of 2 minutes walking after each mile of running, but I think I should have started with every half mile, as I got worn out pretty early on. Still, I managed to keep my average pace under a 13 min/mile, which was the goal. Also, the Nashville Marathon had gone on earlier in the day and apparently I happened upon several miles of its route! 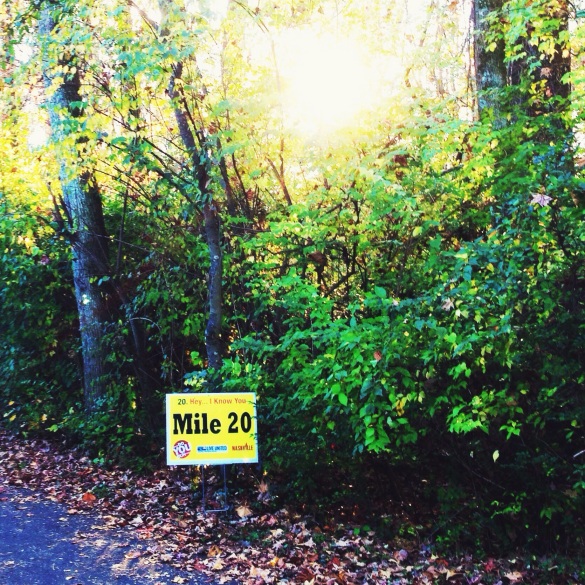 For my last few runs, I’d been noticing a slight twinge in my ankle. Nothing serious, but the same ankle that hurt back in April (before I started this blog). I started really noticing it during these eight miles, but still it didn’t seem so bad. However, on my last mile, I could really feel it, and it was hard to finish out the mile. When I reached the end of my eight miles, I sat down on a bench to catch my breath for a moment. When I stood up to walk to my car, I nearly fell down. I couldn’t put any weight on my left foot at all. I shuffled to my car and made it home, where I spent the next 36 hours RICE-ing my ankle.

Now it is Tuesday and it is still killing me. I can get around, sort of, but any wrong movement and I’m in searing pain. I’m guessing it’s a sprain, though there’s no swelling or visible bruising. I suppose it could be some sort of overuse injury, since it was just a couple weeks ago I was wondering if I was overtraining. So running is out, probably at least for the remainder of this week. Good thing it is a recovery week.

I definitely need to see a physical therapist to figure out if there’s something in my running form that is causing me to repeatedly get injured. I just hope that I’m able to continue with my training for Disney!