Here was my weekday meal plan for this week: 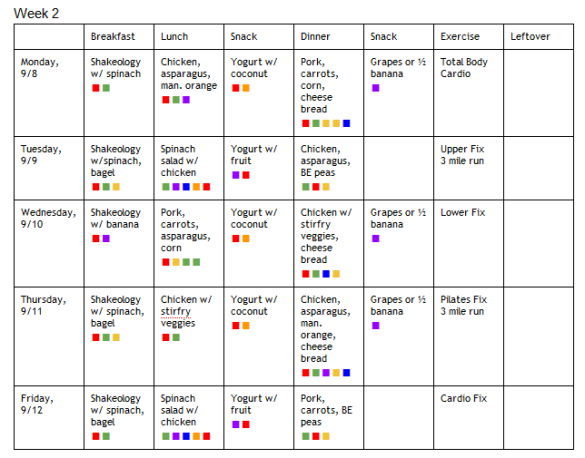 A few changes based on lessons learned from last week’s plan:
– Including chicken in my salads. It was too hard to fit in another red container after lunch.
– Meat other than chicken! I got a little bored of chicken last week, so I cooked up my mom’s pork roast recipe for this week.
– More sugary fruits for snacks. I’ve had carb cravings every single day since I started this thing, so I was hoping the sugary fruits would help curb them. It seems to have helped! Hard to tell, but I’ve had less carb cravings. Whether that is because they diminish over time, because I was eating sweeter fruits, or because I had a few days of cheese bread on the plan, who knows.

I wasn’t a huge fan of the chicken stirfry I made. I used some different frozen veggies than normal (Target brand versus Publix brand), so I don’t know if that was the reasoning or the lack of yummy sauce I usually make when I make stirfry but isn’t allowed on the plan. But I had to throw out most of the veggies on the two stirfry days because I just couldn’t get them down. That definitely won’t be on next week’s plan!

I bought some 8 lb weights this week. Last week I had only been using my 5 lb weights and not differentiating when Autumn says to use your “heavy” or “light” weights. Now I actually have heavy weights. And ow. I did switch out my Cardio Fix (Friday) and Dirty 30 (Saturday) days because hauling 26 pounds of weights to Jonathan’s apartment for one workout didn’t seem worth it.

I weighed and measured myself at the halfway point this week. I didn’t really expect much change in my numbers, but I was down a few inches and about a pound! Also…I have biceps now apparently, which really freaked me out when I discovered that. Hey, abs, get with the program!