My alarm went off at 5:15am on the fourth of July. I hadn’t slept well the night before, so I begrudgingly got out of bed and into my race gear. I had pinned on my bib and attached the chip timer to my shoe the night before. I did a quick check of the weather; it was definitely going to rain the whole race and stay relatively cool.

I ate half a small tub of Greek yogurt to stop my stomach from growling, then popped a Pepto-Bismol tablet and two Tylenol (well, actually I popped some Midol because it was all I had that had acetaminophen in it…so added caffeine boost!). I grabbed my phone, slid my Garmin on my wrist, filled up my water bottle and headed toward downtown.

Once I had parked, I ran up to the office for my last bathroom break before the race. I checked the weather one last time and opted to leave my water bottle in my car. The course had water about every mile, so I wasn’t too concerned with not having enough since the sun wasn’t bearing down.

I arrived at Public Square around 7:15 for the 7:30 start. I tried to huddle underneath a tree to stay dry, but it was a very thin tree and I’m pretty sure it dumped more water on me than if I had just stood in the rain. Around 7:25, they called for us to line up. I chose a place around in the middle, slightly towards the back and on the right, since I knew I would be run/walking the race. They made some announcements, none of which I could hear. The national anthem was sung and we were off a little after 7:35. 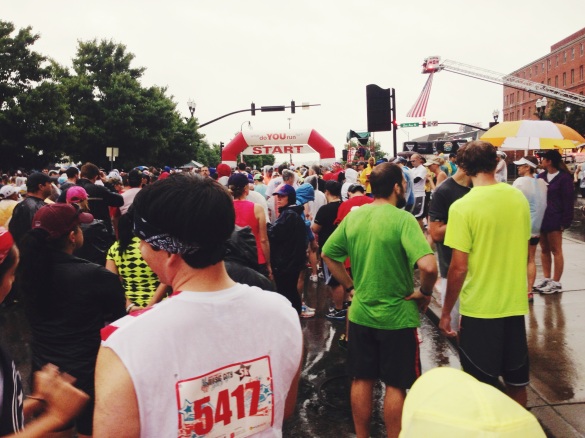 The course is a 5k that is repeated for those running the 10k. My strategy was to run the downhills and flats and walk up the inclines. Before I was injured, I was on pace to run a 10k in 1:13, and my last 10k distance time was 1:17. I had in my head that 1:15 would be a good time, but, overall, I wasn’t too concerned about time, just wanting to stay under the 14 min/mile required for the time limit.

The first mile starts with a slight incline and then is downhill for half a mile before leveling out. I ran for the first 0.6 and then took a 2 minute walking break before finishing out the rest of the mile running until the base of the first major incline just after the start of the second mile. We were running over the Korean Vets bridge, so it wasn’t a very steep incline up the bridge, just a long one, and it took about four minutes to get to the top where the first water station was. I grabbed a cup, chugged it down and then took off back down the bridge.

I walked up the slight incline between 1st Ave and 2nd Ave, then ran the flat section between 2nd and 6th. The course had us go halfway between 6th and 7th, then turn around and run down 6th through the new Music City Center. Once underneath the cover of the convention center, I took a moment to take off my wet sunglasses and shake them off. Then I took out my camera and took a (shaky) photo before running again.

I started getting a bit of a side stitch at this point but I made it to the next water station and was fine after that. By this time we had started on the third mile, which has the greatest elevation, but I didn’t find it as slow as the bridge incline. It would ramp up, then level off, so I was only walking a little at a time. The course took us up in front of the capitol building, around TPAC, and then down the lovely downhill of Deaderick Street. There was an annoying slight incline right before returning to Public Square that I walked the first time through and pushed through to run the second time, since I was so close to the finish. As I crossed over the halfway point, I could hear them announce that some 10k runners were already finishing! I can’t even imagine being that fast.

The second lap was pretty much the same as the first, except with a lot less people. In the first lap, I was constantly having to dodge people (especially the long lines of like 5 people who were run/walking and all stopped at the same time), but the second lap was less congested with all the 5k runners out of the way. There were a group of three people who were doing timed intervals, and we kept trading places back and forth since their intervals didn’t coincide with the hills. 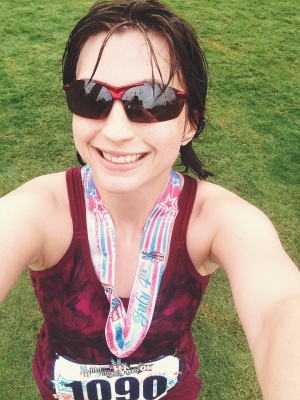 At some point the rain got to my Garmin watch and made it stop displaying my pace and the time. However, it still beeped at each split so I knew it was still recording data. So when it beeped at the 6 mile mark, I was thinking, “Woohoo, almost there!” Except there was actually about a half mile more to go. Due to either GPS inaccuracy or a miscalculated course (or both), the 6.2 miles turned out to be 6.6 by my Garmin. But I pushed through the last bit and up the last incline to the rainy finish. I was handed my medal (first one!) and the chip timer was cut off my shoe.

I hung out for a bit, ate a banana and had a cup of water, but I was freezing and really wanted to see my Garmin data. So I went back to the office and uploaded everything, then went home and took a nice long shower.

I like how the elevation map doesn’t even look like there is an incline on the bridge. I assure you there was. The really flat part on the pacing graph is where I ran through the convention center and the Garmin lost signal, so it just averaged out the pace from when I went in and came out. 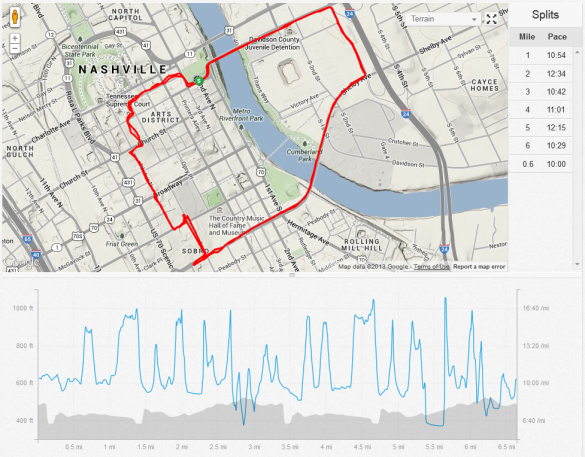 Here’s my half mile splits. You can tell where the bridge ramp was on each lap, since those were my slowest. Notice how I busted out some speed at the end at a 9:47 pace.

My official race time was 1:14:37, which at their calculation of 6.2 miles, put me at an average of 12:01/mile. Either way, it was a good race, especially in consideration of my injuries! Now I get to take four weeks off to heal before I start training for my next 5k and then half marathon training after that!