If you remember, I ran the 10k version of this race last year. When I started planning out my 5ks for the summer, this one fell perfectly in line right where I needed one. I liked it well enough to run it again (though, I probably wouldn’t do the 10k again, with it just being two loops of the 5k).

The joy of having run a race before is you should know exactly what to expect. I knew we would start off on a downhill, then it would level off before climbing that long bridge that annoyed me so much last year. After descending the bridge, it remains mostly level, with some slight ups and downs until you get through the convention center, and then it’s a series of climbs to the finish.

This was not planned to be my pinnacle 5k, as I was bestowing that honor onto next month’s Smyrna Parks 5k which (from what I hear) is flat. But if I could break 30 minutes anyway, it would be awesome, especially considering the hills.

So here were my goals before my knee got messed up and derailed my training:

To run a sub-30 minute 5k, you have to average 9:39 per mile if you run your tangents perfectly. Since the start was on a downhill, I originally planned to run the first mile a little fast–maybe 9-9:15–and then slow on the second and third miles for the climbs. Yes, I actually planned to positive split this race, which is unusual for me.

Anyway, so, of course, my knee happened and I threw all my goals out the window. Which was probably a good idea since I didn’t meet any of them. I did positive split the race though, lol.

Okay, from the beginning…

I got up and got ready around 6:30am. I drove downtown and parked in the library parking lot (which was only $4 compared to the $10-$20 parking actually near the race) and walked the several blocks to the square.

The weather wasn’t terrible. I was actually kind of chilly walking through downtown to the start, so that’s a plus for a July race. For some reason, they had moved the start time to later than last year. No idea why. It would have been better to have it earlier. The sun, however, was beating down, so when you weren’t in the shade it was a little miserable.

I had met some friends for drinks the night before, and I knew I was a little dehydrated going in. I had chugged some water that morning, but I didn’t think it was enough. I didn’t want to risk having to pee in the middle of the race so I stopped about an hour before run time. I considered bringing my own water, but I remembered that last year they had several water stops and that was in the rain, so I assumed they would have us covered with it being hotter and sunnier.

I knew from experience that I wanted to start probably about mid-pack and to the left to try to clear myself away from any walkers, since the course is a little congested at the beginning. This year was no exception. We started close to 8am, but it was pretty slow going until we got out to the first bridge.

Mile 1: 9:36
Yes, I actually started out mostly on target to run a sub-30, but this mile was mostly downhill so it was to be expected. My red, white, and blue headband that I had just bought (this was only my second time running in it) flew off my head at half a mile in. So I spent most of the second half of the first mile concerned about my hair. Not really what you want to be thinking about in a race.

Mile 2: 10:34
I stopped to walk about a quarter mile into the second mile, so I could repin my hair. It had started falling into my face with my lack of headband and was annoying me. I was at the base of that bridge I hate, so I started running up it. I was feeling pretty dehydrated at this point, since the entire thing had been out in the sun thus far. The first water stop was at the top of the bridge, so I just needed to make it up there. I stopped and walked a little of the bridge at this point, then ran to the water station where I took another walking break.

Instead of cups, they were using these water bag things. The directions said, “Bite. Squeeze. Drink.” So I bit and squeezed and….nothing. Oh, I have to rip it with my teeth. That’s not in the instructions. I was desperate for water and this annoyed me to no end, but I felt I would be prepared for the next water station. I ran to the end of the mile.

Mile 3: 11:17
I took a brief walk break at the beginning of this mile, as I was feeling the need for more water. Luckily, we were about to run through the convention center, so SHADE! I ran through that, remembering that the next water station from last year was just past this point. The course had changed slightly, however, so I wasn’t entirely sure where to expect it. I told myself I’d run until I got to it, but….that didn’t happen. I took another walk break up a hill, ran a bit, then took one more.

By this point, there was only about 0.3-0.4 mile left of the race. I finally realized that they took away the second water stop. I told myself I’d have to get to the finish if I wanted water, so I started booking it since we were finally in the shade of the skyscrapers.

Mile 0.1 (0.13 to my watch): 1:09 (8:14 pace)
I crossed the finish line flying. And then…flashback to the Richland Creek Run finish. I grabbed a water, but couldn’t bring myself to drink it. I just knew I was going to throw up in front of everyone. I could barely even accept my medal. I started making my way towards the portapotties, but I thought I was going to lose it in a bush. Just before I got to the portapotties, the feeling subsided. I finally downed my water and a banana.

Yep, despite the tons of walk breaks, I was only 1:10 off from my PR. Sigh! I can do lots of what ifs at this point (the main one being, what if I had drank water the night before instead of freaking margaritas), but it is what it is.

Since I’ve run this race before, I get to compare it to how they ran it last year!

First, the positives: they improved the course. It was mostly the same, but they added a flat little section near the stadium that means they got rid of a couple extra uphills toward the end. The medals actually had the year on them this year, an improvement over the generic medals from last year that I was a little scared they were going to reuse since they weren’t dated.

The negative? They removed a freaking water station despite it being sunny and hotter than it was last year. What is the point of that? I was counting on that water station! Maybe it would have made a difference in my time, maybe not (although probably, because the lack of water was mentally defeating me), but I just don’t understand how they wouldn’t have ADDED water stations instead of REMOVING one. I know a lot of people don’t think water stations during a 5k are necessary, and one station is usually typical for a 5k race. I just chose not to bring my own water based on last year’s race and “knowing” that they had more than one. I didn’t see anything on the website or emails beforehand that would have clued me in that there would only be one this year.

Note: There was a second water station for the 10kers, which was just after the start point (they run the 5k loop twice). This means they only got 3 water stops this year, instead of the 5 we had last year. I would die. I usually need water every mile when it’s hot.

Apparently there were a lot of issues with the timing and results as well, though that didn’t affect me. I also heard that they ran out of Gatorade for the people at the end.

I started out running very well. I have high hopes for next month’s flat 5k, as it was mostly the hills that killed me on this race.

You can see my quarter mile splits here. My first mile was so on target! Then it’s just a hodgepodge of paces after that, until I decided to just sprint it out at the end to the point of near vomiting, lol. 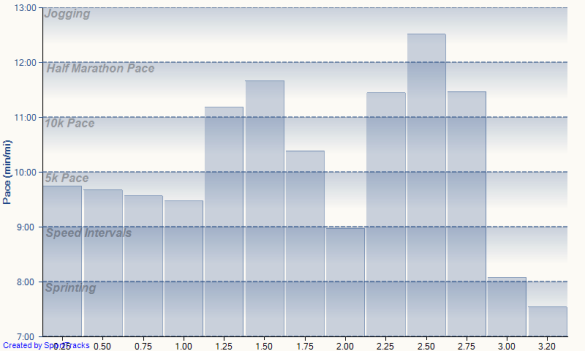 Strava tells me I was almost good. This kind of sums up the entire race. Even my final quarter mile sprint wasn’t the fastest I’ve ever done.

Injury-wise, I was okay. My knee got a little stiff while sitting down a few hours after the race, but was fine after I stretched it. My biggest surprise was how sore my glutes were the next day. Maybe I finally started using them when I run??

The main lesson learned is NO ALCOHOL THE NIGHT BEFORE A RACE.