Week two of no training plan! That’s all about to change, but I enjoyed it while it lasted.

I went and ran with the Flyers. This week they met at Long Hunter to run the two mile loop around Couchville Lake. Some people ran it once, others twice, and three times for the fasties.

As soon as I arrived, two deer walked by in the parking lot. 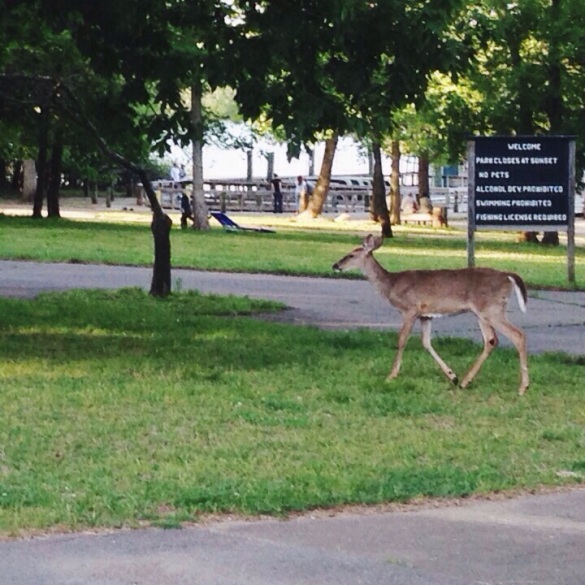 I started out thinking I might run it twice, but I’d see how I felt after going around once. My car said it was above 90 again, so it was hot but the path was mostly shaded. I started out running with a small group of people, but soon I found myself mostly alone, as a few of them had surged forward and a few had stopped to walk. I considered walking, as it was so hot, but I didn’t. Close to the end of the loop, I spotted a turkey in the woods. From what I hear, sometimes this turkey attacks runners. I’m glad he didn’t come after me!

After I completed the loop, I decided that was enough. It was just far too hot. I could have done another loop, but I don’t think I could have without walking some of it, and I decided I’d rather have two miles of straight running than four miles with some walking. Average pace was 10:44–a little speedy considering the heat!

Day two of hot runs! I went out to run with East Nasty this week, and the route was a 4.5 mile loop around East Nashville. This route also happened to include a hill in Shelby Park that I happen to despise. (I’ve only attempted that thing once before.) I didn’t walk on the hill, but I did take a break soon thereafter on another slight incline just after the start of the third mile because we were in the direct sunlight. I took one other walk break with about a mile to go. Overall, my average pace was a little over 11 min/mi, so not too bad.

I decided I should get my brain prepped for my upcoming training by doing some speed work this week. According to my plan, I’m supposed to do six intervals of 400m at 5k goal pace as my first workout of the training cycle. So I decided to do four and see how they went.

I had programmed my watch with all my upcoming workouts months ago. Probably before I actually finalized my training plan. I selected the workout that said “4x400m strides”, which I assumed was correct because it was the only 4x400m workout I had on my watch.

I did about half a mile warmup at 11:30 min/mi pace then hit the lap button to trigger the first interval. “Speed up!” the watch kept urging me with its beeping. So I did. I soon realized that the watch wasn’t programmed to get me to run goal 5k pace (9:00-9:30 min/mi); it was programmed to get me to run faster than goal pace (8:00-9:00 min/mi). Oh, that’s what it meant by strides.

What makes it even funnier is that I thought I might just do three when I went out, but I still felt like I could do a fourth, so I went ahead. I may keep my interval runs (done every three weeks) at this pace; that is what the training plan originally called for, and I don’t remember why I changed it. We will see when I actually have to do six of them next week.

I thought about running Saturday morning before I went off to second shoot another wedding, but I decided to relax instead. So my next run was Sunday evening, when I went out for a three mile jaunt in Clarksville, since I was there for Mother’s Day. I keep forgetting that it is virtually summer now. Spring never happened. I didn’t bring water, so I ended up walking a few times. I also wonder if my IT band was really tight because the outside of my right knee and up my thigh has been hurting ever since. Time to get back to doing my clamshells, I guess.