When I started planning out my 5k and 10k training for the summer, I knew the first thing I had to do was figure out the 10k. Nashville just doesn’t offer very many of them; there’s maybe about one a month, if that. The It’s Just a 10k was a little too early (August 23rd), as it would only give me about a week of a break after the Country Music Half. I could have used the new Go Commando 10k as my target (October 19th), but I didn’t know they would be introducing it at the time. So the Franklin Classic 10k was chosen. Held on Labor Day every year, this is the 36th annual race. Yes, you read that correctly. Thirty-sixth. I figured if they’d been doing it for that long, they had to be doing something right.

I planned out my time goals a couple months ahead of the race. To remind you, they were as follows:

However, then I decided to stop my training and do low heart rate training instead, which was probably a bad idea. After I stopped LHR training, I noticed my speed and endurance had gone way down. In addition, I had only done one real six mile run in over four months. I thought my previously set goals were probably unattainable, but I was still willing to try for them, figuring at the very least, I’d get my C goal (none of my races–even the longer ones–have been at that pace in over a year, besides Disney).

I woke up, got ready, and drove down to Franklin without any problems. I broke Rule #1 of racing in that I wore something new on race day, but my new clothes that I had just bought on sale from Lululemon were too cute to pass up.

The forecast was for partly cloudy and in the 70s. Didn’t sound too bad to me, but when I got outside, the humidity hit me like a rock.

I hit the port-a-potties as soon as I arrived (they provided hand sanitizer too!), then picked up my shirt and bib number.

The start line had markers to section people off by pace, which was nice. It helped people to line up properly. I got in the 10:00-12:00 section. My plan was to start around a 10:30 pace and see how I felt from there.

There was no water station at the one mile mark, but I took a quick break anyway. I hadn’t realized how hilly the course was, and it was starting to take its toll on me.

Mile 2: 11:36
My hair, which was up in a ponytail and the way I’ve been wearing it while running for the past month or two, kept falling down. So another quick walk break to pin it back into place.

I enjoyed a nice downhill and then walked an uphill and through the first water station. I knew I was falling off goal pace, but I was still confident I could achieve my C goal and get a PR.

Mile 3: 12:33
This is the mile where it all started to fall apart. I started walking all uphills, which was most of this mile. The sun and humidity were killing me, and I couldn’t believe I wasn’t even halfway yet. I wanted nothing more than to be done. I started to doubt my PR abilities.

Mile 4: 12:48
It seemed like everyone around me was struggling as well. I was still running near some of the people I had started the 10:30 pace with, so it seemed like several people were being affected by the hills and the heat. My PR, while still attainable, was starting to slip away.

Mile 5: 13:00
To really put the nail in the coffin of not getting a PR, I had some mad cramp start in my lower left side. It wasn’t a normal side stitch, which is usually just below the rib cage. This was much lower. It would only happen when I was running; while walking I felt fine. So I started running in about 30 second bursts until I couldn’t take the pain anymore.

My hair was still falling down (I think it was trying to sabotage me), so I finally just used one of my walk breaks to stick it in pigtails.

Mile 6: 12:23
Despite the cramp, I tried to push it a little more on this mile, knowing I was almost done. I managed a three minute stretch of running once there was only a half mile left in the race. One more walk break, then…

One minute off of my PR. But I don’t think I could have pushed anymore. If that cramp hadn’t shown up, sure, but there was nothing I could do once it decided to make an appearance. I still don’t know what caused it. It wasn’t GI-related that I could tell.

No complaints about the race itself! It was well-organized and inexpensive. Crowd support was decent, especially around downtown Franklin. The route was well-marked and the police controlled traffic nicely when we crossed major roads. Just be warned that the course is pretty much entirely rolling hills (though none of them are steep).

My watch time was about 20 seconds faster than the official time. No idea why. They are usually closer, but it’s not a big enough margin to think there was something off with the timing.

My only real annoyance was that I guess there were no official race photographers, but it’s not really a complaint because it was an inexpensive race where I wouldn’t really expect them anyway. I guess my complaint is that *someone* (that I thought was an official photog) took my picture right before the finish line, and I have no idea how to find that picture! Thus the delay in getting this posted; I kept expecting it to pop up somewhere.

Edited to add: The picture finally got posted on their Facebook page. Yay! 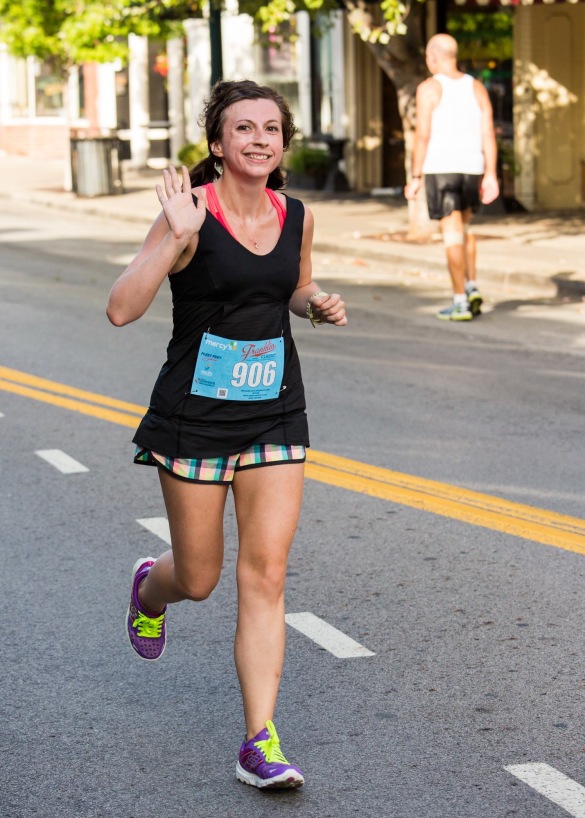 As you can see from this graph, it was really the hills that killed me. This is what I get for mostly trying to avoid hills all summer, since my target 5k was flat. 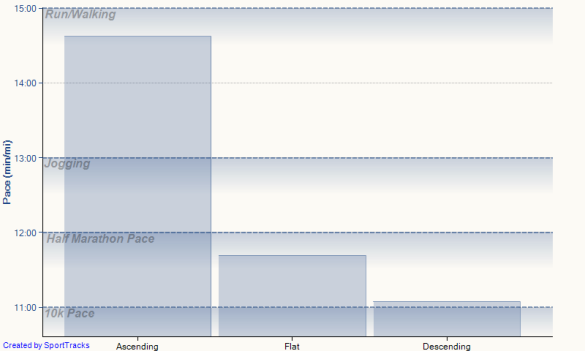 While I spent over 40% of my time at the correct pace or faster, I also spent about 40% of my time walking. Not good. (By contrast, a race where I only walk water stops is about 1-8% walking, depending on the number of stations.)

We all have off days and bad races, however. I knew I wasn’t really trained for this race. I think the next time I run a 10k, it will be in the middle of half marathon training. Anyone know of any good 10ks around Nashville in January?