Going into this race, I kept my expectations low. I hadn’t trained well or often. Most of the training period had consisted of IT band issues on my side and ankle issues on Jonathan’s side, with an added dose of insomnia. I knew Jonathan would be fine, but I was disappointed that his first half marathon experience would include probably a lot of walking because of my lack of training.

However, we said we would just do it for fun, not care about our time, and just do whatever I felt like I could. My only real goal was to not get a personal worst, which just meant beating my Walt Disney World Half time of 3:07.

We left the house around 6am for the 7am race start. This soon proved (we thought) to be a bad decision because traffic was terrible to get to the race. We didn’t get to park until after 7:00. It was pouring rain as we walked from parking at the stadium into downtown.

We knew we would have a little time before our corral (19) left, so we had a final bathroom break before heading up to the start line. Apparently, there had been lightning in the area, so when we finally arrived close to 7:30, the race hadn’t even started yet. Jonathan took this opportunity to stretch, and I just hung out looking awesome in my trash bag. It had stopped raining at this point.

Miles 1-3: 12:14, 12:30, 13:25
My strategy to start out was to run flats and downhills and walk the uphills (and water stops). I was feeling pretty comfortable with this strategy, wanting to make sure I conserved some energy for the end, and hills are what had been giving me problems in training over the last couple months. Jonathan stopped for a quick bathroom break on mile 3.

Miles 4-6: 10:45, 11:18, 11:10
Soon after the start of mile 4, I ate my first lemonade Huma gel. This felt like it gave me some good energy (caffeine buzz?) and so the next three miles were pretty good. I even ran up some hills. It also helped that these miles are my favorite of the race, running through the Belmont area with all the spectators giving out high fives and cheering you on.

Miles 7-9: 12:22, 13:02, 12:55
The next few miles were hillier and a little tougher. I trudged on but my stomach was starting to feel a little funny. I thought maybe I was hungry again, so I ate my second gel. This turned out to be not such a great idea. My stomach went from just a little rumbly and full on pain.

Miles 10-13: 14:35, 18:48, 16:22, 15:34
We started walking a lot from that point on because I felt like I was going to throw up whenever I ran. On mile 11, I took a bathroom break, but it only moderately helped. We ran a few times, but most of this stretch was just walking and trying to finish. If Jonathan hadn’t been with me (and I hadn’t wanted that medal so bad!), I probably would have called it quits at this point. I was in a ton of pain.

Final 0.1 (0.31 to my watch): 2:57 (9:36 pace)
The course had changed a little this year (at least compared to two years ago) and the ending had a lot more hills than before! Not cool! After we topped the last one, we started to run into the finish. My stomach felt okay, and I was able to finish well.

I did finish ten minutes ahead of my PW time, which is all I really wanted to do, so I can’t complain much, although I wish Jonathan’s first half marathon experience could have been better (he says he still had fun, even though I made him walk a ton). I do wish I could have prevented the stomach issues, but I still have no idea what happened. It hurt for the rest of the day, even just lying on the couch.

I was happy with the stretch of miles through Belmont. Too bad I couldn’t have kept that momentum up.

The race had a decent spread of food at the end, though, for once, I didn’t have much of an appetite. I ate a few pretzels and drank some chocolate milk. We didn’t hang out too long, as it was starting to rain again.

I do love the medal. 🙂 It is my new favorite. 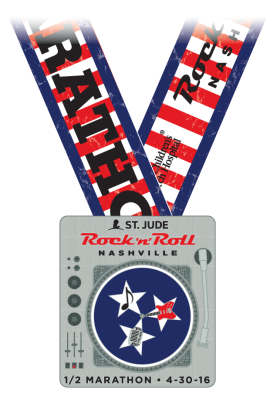 The marathon medal looks exactly the same (except it says marathon) and has a blue ribbon with white writing.