Ah, the blissful week after completing a half marathon where you don’t have to run unless you want to and don’t have to hit specific paces or mileage!

I didn’t get to my first post-half run until Friday. I was going to run with the East Nasty group on Wednesday, but then we ended up getting concert tickets to see Local Natives at the Ryman, so I did that instead. And then Thursday was Arcade Fire at Bridgestone, so I didn’t make it out to the pavement until after work on Friday.

It was a bit of a stiff run, since it had been almost a week, but I just did whatever I wanted and it felt glorious. Sometimes I sprinted. Sometimes I walked. Once I decided to do impromptu hill repeats (who does that?), but after I ran up once, I decided nah and kept going down the street.

I was second shooting a wedding Saturday afternoon, so I went out for three miles beforehand (because I hate my legs and wanted them to be as sore as possible by the end of the night). Just down the main road and back, although my turn around point was right around Sonic, and I wished I had brought some money for a slush or a shake because it was really hot outside and I hadn’t brought water. Because of this, I ended up walking a couple times on my third mile to cool down, even though I hadn’t initially planned to. (Thanks for telling me it was cloudy and in the 60s, weather.com.)

I had an itch to go running on Sunday, as well, but by the time I had gotten out of bed, it was nearing 90 degrees. So I decided this meant I needed to go somewhere shady and that meant trail running!

You’ll remember the last time I tried this, it did not go so well, but I chose a different trail in the same park. This trail was much easier to actually run on and wasn’t covered in leaves so I could actually tell where the trail went. I did the first mile in 11:30, my normal running pace. I decided I should probably slow down, since I had limited water with me and parts of the trail were out in open sun, so I was getting hot fast. So my next mile was done in 12:54, which is still okay with me on the trails, since I was occasionally having to climb over trees and do some fancy footwork around tree roots and rocks. 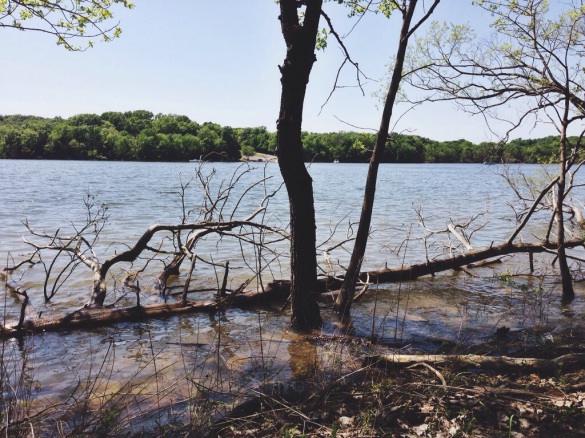 The first mile is right by the lake. It was taking everything I had towards the end not to jump in.

I turned around after half an hour (about 2.4 miles in). Soon after I turned around, I came upon a small incline with some tree roots, and thought to myself, “This looks tricky. Be careful.” And then I freaking fell! It was one of those slow motion things where I could feel myself trip and then helplessly feel myself falling without being able to do anything. I skinned up my right knee, which seemed to take the brunt of the fall, and got a couple tiny cuts on my left hand.

Needless to say, I was much slower after that. My right leg felt pretty bruised and just generally sore from the jolt of the fall. My final 2.8 miles were done around a 13:20 average. Still better than my last trail run!

I do enjoy trail running (I saw a deer at one point!), I just don’t know if my klutzy self and it can get along. At least I did not get lost this time and end up in the woods after dark.